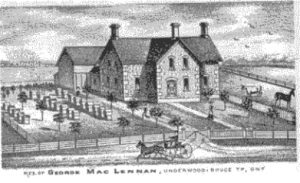 From the 1880 Beldon Historical Atlas of Grey and Bruce Counties

The County of Bruce is bounded on the west by Lake Huron; on the east by Georgian Bay and the County of Grey; and on the south by the County of Huron. Its eastern boundary, from the point where it is joined by the three counties of Huron, Wellington and Grey, is almost due north till it strikes Colpoy’s Bay, an indentation of the Georgian Bay, whence, to the northern extremity, its outline is extremely irregular, while its western shows an evenly-shaped crescent, with Cabot’s Head and Point Clark for its northern and southern points. It is composed of the sixteen townships of Albemarle, Amabel, Arran, Brant, Bruce, Carrick, Culross, Eastnor, Elderslie, Greenock, Huron, Kincardine, Kinloss, Lindsay, Saugeen, and St. Edmunds: The incorporated towns of Walkerton and Kincardine; and the incorporated villages of Lucknow, Paisley, Port Elgin, Southampton, Teeswater, Tiverton, Chesley, and Wiarton. Among these the five townships (beginning south) of Amabel, Albemarle, Eastnor, Lindsay and St. Edmunds, together with Keppel and Sarawak, in the County of Grey, form a narrow strip of land, dividing the Georgian Bay from Lake Huron, and generally known as the Indian Peninsula. The whole county covers an area of 771, 656 acres, or about 1205 3/4 square miles.

6 In Search of Your Canadian Past: The Canadian County Atlas Digital Project

9. The History of the County of Bruce Note: You will need to have an account with familysearch to access this book.

11. Benchmarks: A History of Eastnor Township and Lion’s Head

12. Bruce Township tales and trails: from early days to 1983

13. Gazetteer and Directory of Bruce County

14. The History of the County of Bruce and of the minor municipalities therein, Province of Ontario