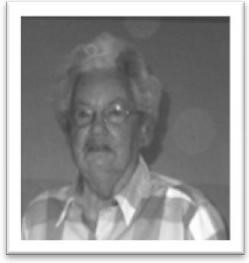 We are very saddened to announce the passing of long-time Bruce & Grey OGS volunteer Betty Siegrist who passed away on Sunday, May 21, 2017 at the age of 93. Betty worked tirelessly for the branch for more than thirty years. For many years Betty was the face behind the branch’s table at the OGS conference marketplace. She also housed the branch’s publications and looked after all the photocopying and mailing of the publications. She was instrumental in transcribing many of the cemeteries, especially those in the Wiarton area and she indexed the Births, Marriages and Deaths from the Wiarton Echo. A few years ago the branch honoured Betty and her close friend Betty Warrilow at one of our Branch Meetings. “Our Two Betty’s” as they were fondly called. They had no idea we were honouring both of them as each thought the other was being recognized and each wrote a little speech on their friend to read at the meeting. Betty Warrilow has kindly supplied her presentation to include here.

“Betty Adaline Siegrist was born 1 March 1924 at London, Ontario to Charles Barker and Bessie Roberts. She attended Ealing Public School, Sir Adam Beck Collegiate and H.B. Beal Technical School. On 22 May 1942 she married Charles Theodore Siegrist RCNVR. Her uncle Rev. A. W. Barker officiated. In 1951 they moved to Wiarton where they purchased the family farm once owned by Charles’ grandparents, Henry Loney and Maria Walpole. They built and operated Cedar Haven Cottages along the shore and built the family home in Oxenden. Betty was employed by Wiarton U.C.O. 1956 – 1976 and wrote for the Mary Hastings column of the London Free Press under the pen name “Up County Betty” 1951 – 1976. Charles worked as an electrician for Fitter Electric in Owen Sound and later at Bruce Nuclear. Betty and Charles had two sons. Eric who lives with his mother in Oxenden and Joel of London, the father of Betty’s three granddaughters.

Betty is an extremely interesting person, with a well-developed sense of humour. Her interests are many: sewing, oil painting, skiing, ice fishing, gardening, jelly making, but her greatest interests are her church, Frank Street Baptist in Wiarton and in family history. After Charles death on 8 April 1985, she became a world traveler usually by herself. She visited her ancestors’ homes on Jersey and in England and made two visits to the Holy Land.

After Charles’ death in 1985, Betty was a golden find for the Bruce & Grey Branch of the Ontario Genealogical Society. She housed the collections, answered hundreds of queries, collected thousands of pieces of data including B.M.D.’s from the Wiarton echo from 1800’s to 1948. She clipped and sorted BMD’s for the Surname Collections. She is a reliable great friend to Betty Warrilow and was willing to give help for any task. This included The History of Keppel Township and assisted with at least 3 Federal Elections starting in 1988.” 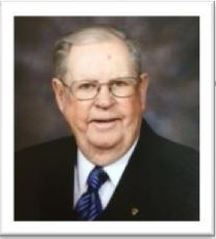 Long time Branch member and volunteer James Atchison White passed away on Friday, February 3, 2017 in his 94th year. Jim spent many hours clipping, organizing and pasting newspaper articles into scrapbooks to create what we now refer to as our Surname Collection. Jim left behind his beloved wife Helen (nee Belrose) and two sons Robert and Edward (wife Melissa) as well as two granddaughters, Cassandra and Amber. He was predeceased by his sister Mae Fleming and his brothers Ewart and St. Elmo. Friends were received at the Beckenridge-Ashcroft Funeral Home, on Tuesday, February 7.